ARTs and Women: Assistance in Reproduction or Subjugation?

Sama’s first study on ARTs in India, was undertaken from 2004-2006 conducted in metro cities, Delhi, Hyderabad and Mumbai to unveil the social, medical, ethical and economic implications of ARTs on the lives of women. The research was qualitative in nature, and interviewed 23 providers and 25 women users from, as well as 20 activists. Through this research, we attempted to gain a more holistic understanding of the oft-quoted concepts of choice, empowerment and autonomy in the age of technology. The findings of this study also hinted at developments—which were to take clearer shape in the following years—that merited further investigation into certain aspects of ARTs. For instance, these technologies did not appear to be isolated medical ‘treatments’; they were part of a larger business, which has now grown into a veritable ‘fertility industry’. Then, ART provision in India appeared to be shifting, spreading from metropolitan to smaller cities, with referral chains across cities, sometimes-even states.

Women and Health have always been Sama's primary concern. As part of Women's and health movement, Sama has camapigned against technology that target women's bodies in the name of reproductive choices. Sama undertook a research on ART guided by the fact that it's implication on the end user is governed by gender. A report was published on the findings of the research on Assisted Reproductive Technologies and its social, medical, ethical implications on women. 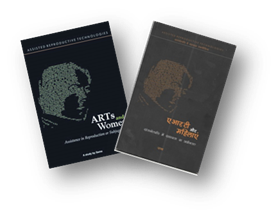