“Camp of Wrongs: The Mourning Afterwards” – A fact finding report on Sterilisation deaths in Bilaspur by Sama Resource Group for Women and Health, Jan Swasthya Abhiyan and National Alliance for Maternal Health and Human Rights 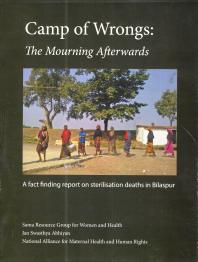 The recent tragic deaths of the 13 women, all in their 20s or 30s and the critical condition of the 70 other women, following procedures of laparoscopic sterilisation in Bilaspur district, Chhattisgarh, have flagged clear violations of ethical and quality norms in the health care system.

Following these appalling incidents, a team of women’s and health rights activists from Sama, Jan Swasthya Abhiyan and National Alliance for Maternal Health and Human Rights from Delhi and Chhattisgarh initiated a fact finding towards exploring and unravelling the gross violations that had taken place.
​The fact finding teammet and interacted with families of women who had lost their lives, as well as with families of those who were in hospitals following complications. During the fact finding, government officials, doctors, Mitanins and Mitanin Trainers were also met with.
The findings based on these interactions and observations, the emerging issues as well as recommendations have been documented in a report titled: Camp of Wrongs.

Following is the link to the report

Camp of Wrongs – The Mourning Afterwards